Case Study - Labour Party - No to the Alternative Vote

The Labour Party chose to reach the public using a Promovan to campaign around several key cities in the UK to harness interest in the No vote, in the build up to the referendum voting date on May 5th 2011.

The campaign started in the North East with an advan visiting Newcastle, Sunderland and Middlesborough. John Prescott former Deputy Prime Minster helped with the unveiling in Newcastle city centre.

Glasgow followed on the Monday, then Cardiff, Manchester, Liverpool and Leeds as the roadshow rolled on with extensive coverage from local and regional press.

As voting day approached the Promovan headed on to Chesterfield, Derby, Nottingham, Leicester and Northampton on route back to London. 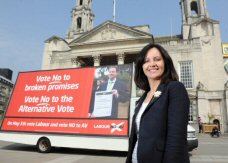